Belarus is the heart of Paris-Moscow marathon 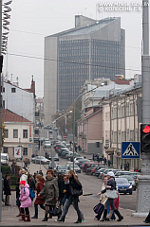 13 August 2009 → Konni Schmidt: Belarus is the heart of Paris-Moscow marathon

Olga Ryabikova and Valery Rassolko from Belarus joined the Paris-Moscow 2009 international cycle marathon that arrived in Minsk on 11 August, BelTA learnt at a press conference in the House of Press on 12 August.

The marathon held by the German society “Bike for Peace and New Energies” has been organized for the fourth time. The Paris-Moscow marathon is aimed at promoting peace, disarmament, non-violence and cooperation between the nations that suffered in World War II as well as protecting the environment and promoting healthy way of life. Konni Schmidt, head of the Bike for Peace and New Energy organisation, who also arrived in Minsk, has been organizing peace events since 1980. He has already organized 19 large marathons across Europe.

It is still important to campaign for peace, Konni Schmidt further said . There have been wars in Iraq, Yugoslavia and Afghanistan. The Paris-Moscow bike marathon is only a small part of the global anti-war movement.

“Belarus is the heart of the marathon. I am thrilled every time I ride along Independence Avenue in Minsk. There is no other country where the power of reconciliation is felt so strong. Probably this is because that Belarus suffered the worst in WWII. Although I am a representative of the country, whose army brought so much harm to the Belarusian people, I have never heard a single bad word directed against me. This is a miracle,” Konni Schmidt said.

After Minsk the participants of the cycling race will make their way to Moscow through Zhodino, Borisov, Berezinsky biosphere reserve, Lepel, Chashniki, Senno, Baran, Orsha, Dubrovno on 13 August. The cyclists will leave Belarus on 17 August.

The marathon started in France on 4 July and included around 50 participants. The participants arrived in Belarus on 8 August and visited Oshmyany, Golshany, Volozhin and Zaslavl. About twenty Belarusian cyclists joined the race. The current team includes 8 cyclists planning to cover the whole distance from Paris to Moscow.

In Belarus the marathoners will visit cultural and historical sites, meet with representatives of the state, civil and sports organisations, war veterans. The international team includes around 50 participants from Belarus, Poland, Germany, Austria and Russia. In 2008, the race was attended by the participants from 14 countries.

The marathon spanning 4,067 kilometres is to finish in Red Square in Moscow on 25 August.